Hi Fly lands first ever Airbus A340 in Antarctica (with video) 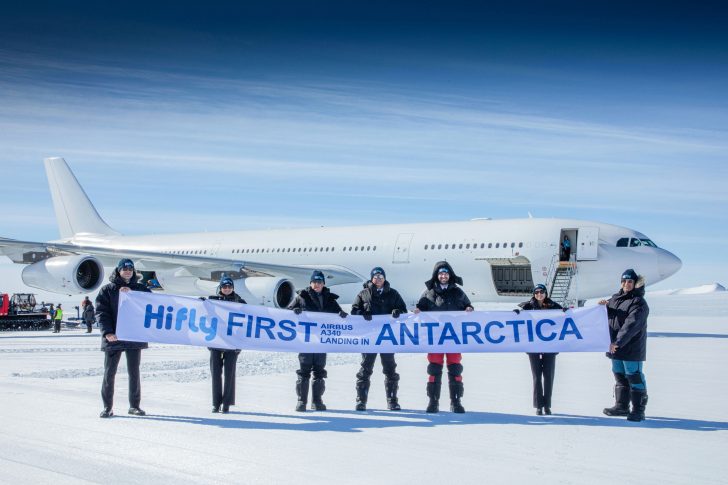 Captain Carlos Mirpuri and his crew flew the widebody aircraft, from Cape Town to the White Continent and back; the journey is 2,500 nautical miles, flying for just over five hours each way. Never before has an A340 landed on an Antarctic blue glacial ice runway. The aircraft will be used this season to fly a small number of tourists, alongside scientists and essential cargo to the White Continent.

Hi Fly 9H-SOL is an A340-313HGW (High Gross Weight) with a maximum take-off weight of 275 tons. It is an aircraft that delivers, every time. Highly reliable, comfortable, with an excellent safety record, the aircraft was carefully chosen to perform well in this extreme environment. Its exceptional range and 4 engine redundancy also makes it ideal for this type of remote operation. 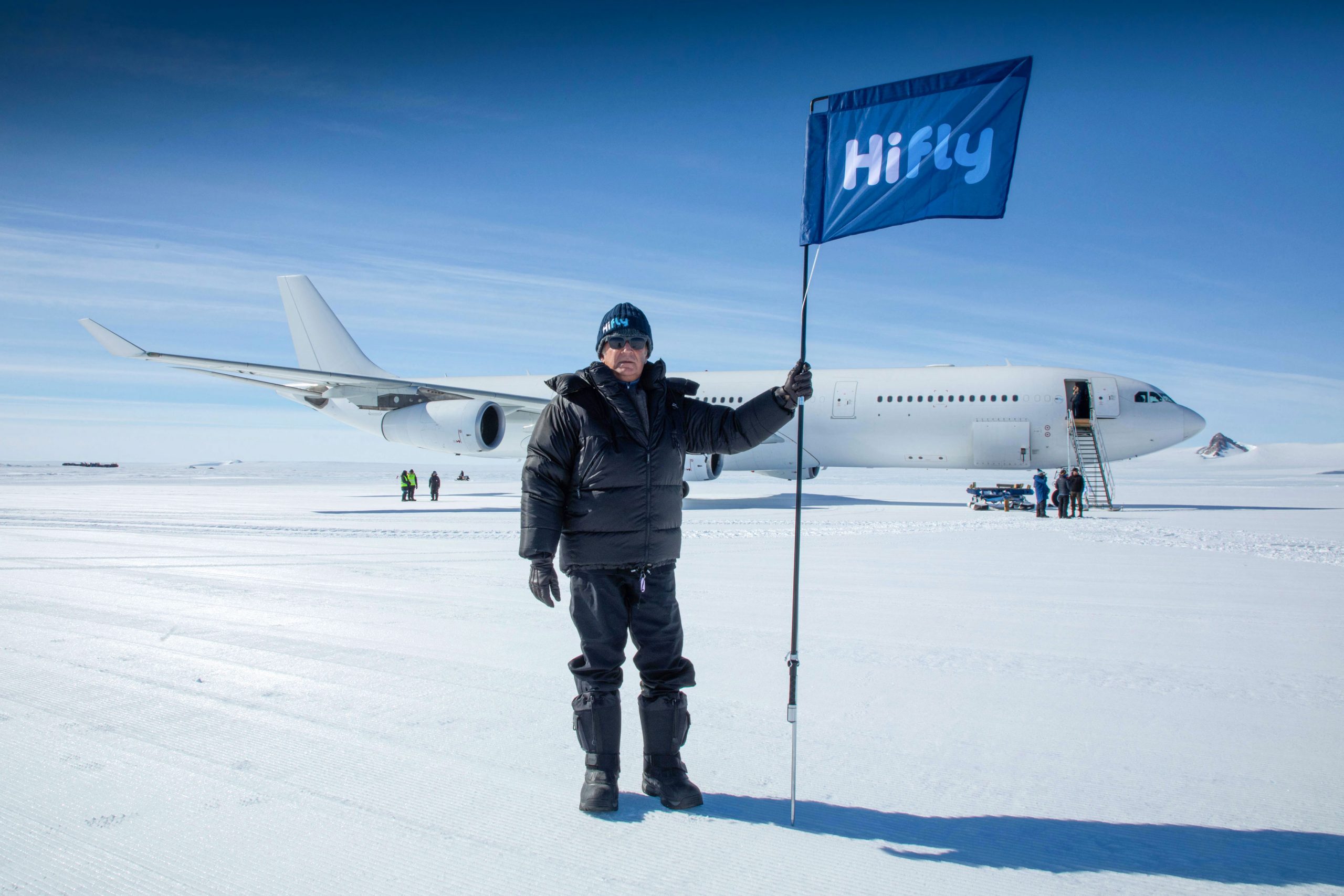 The crew assembled and departed the hotel in Cape Town at 5 am local. Transportation took 30 minutes to CPT airport. Processing through the airport took another 30 minutes and we arrived at the aircraft at 6 am, with two hours left to our STD (Scheduled Time of Departure).

Engineers and Ground Operations staff had left the hotel an hour earlier, so when we arrived at the aircraft refueling was completed and cargo loading was underway. We expected 23 passengers, all staff from the customer, and as this was the first flight of the season, most of the ground support equipment that we would need in WFR (Wolf’s Fang Runway, Antarctica) was actually in our cargo compartments. The first two sorties are solely for the purpose of setting up the operation down in Antarctica, ahead of the 2021/2022 summer season.

The 2500 nm between CPT and WFR would take us 5h10m on the way down, and 5h20m on the return. As this was the very first flight, with limited support on the ground, we planned for a 3h turnaround time in WFR.

It would be a long day for the crew but the excitement of participating in such a unique event stood above anything else.

As always we start with a crew briefing on arriving at the aircraft. This is not just another flight, there are specificities related to this very remote operation we would be conducting, the harsh environment we would face, and the need to ensure proper protective clothing would be on board.

While cabin checks and catering loading was undergoing, me and my crew were inspecting the aircraft, checking its systems, loading the route into the navigation computers, and briefing the details of our departure.

Passengers arrived 20 minutes before STD. It was exactly 8 am local time when we pushed back from the gate. On-time. Every time. This is the Motto at Hi Fly.

We lined up on runway 01 but had to pause for a moment before launching; I spotted intense bird activity over the runway and asked the tower to roll the truck in charge of scaring them out, at eventually they moved out of the way. The last thing we want is a bird strike and potential engine damage on any flight. At 8:19 am we were finally airborne. A beautiful morning in Cape Town and magnificent views.

It is an airplane that delivers, every time. Robust, comfortable and safe, performs well in this environment.

Its 4 engines redundancy and very long range, make it the ideal airplane for this type of mission. 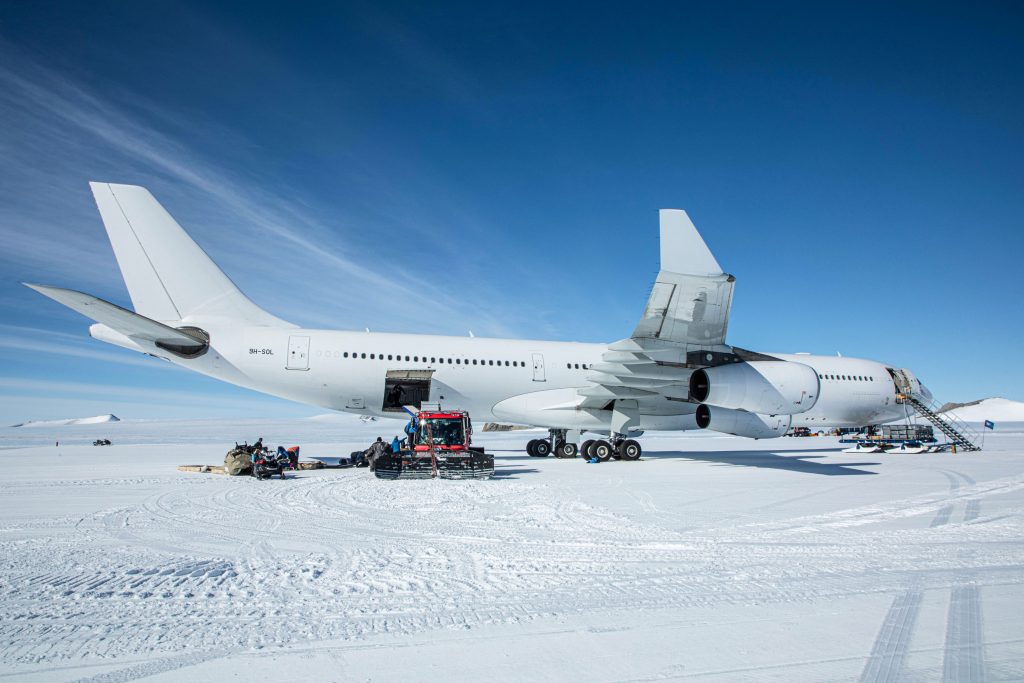 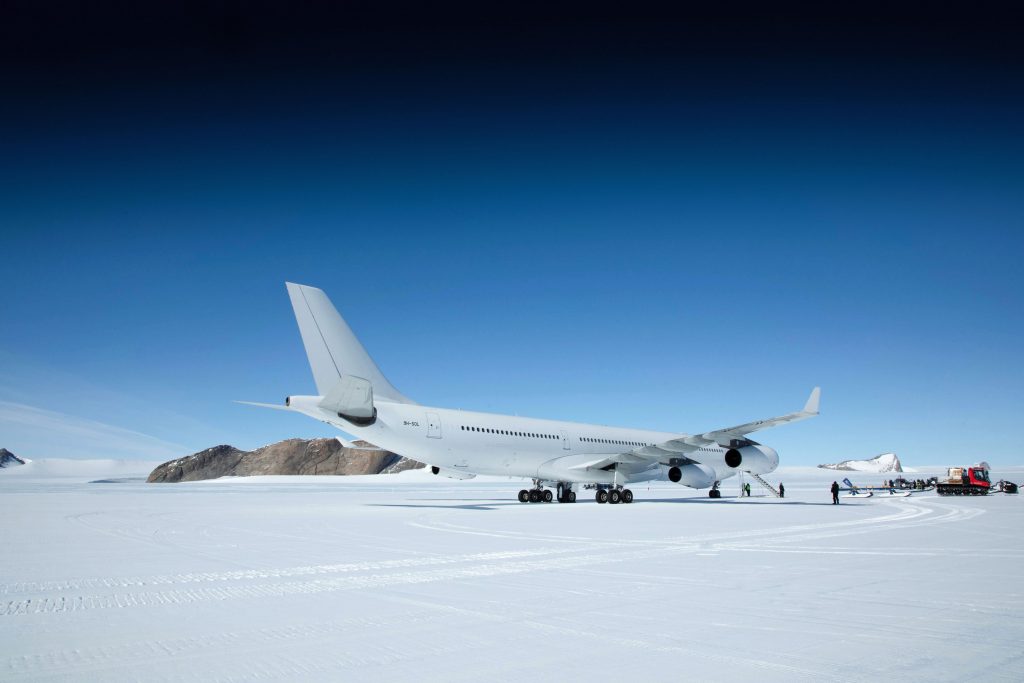 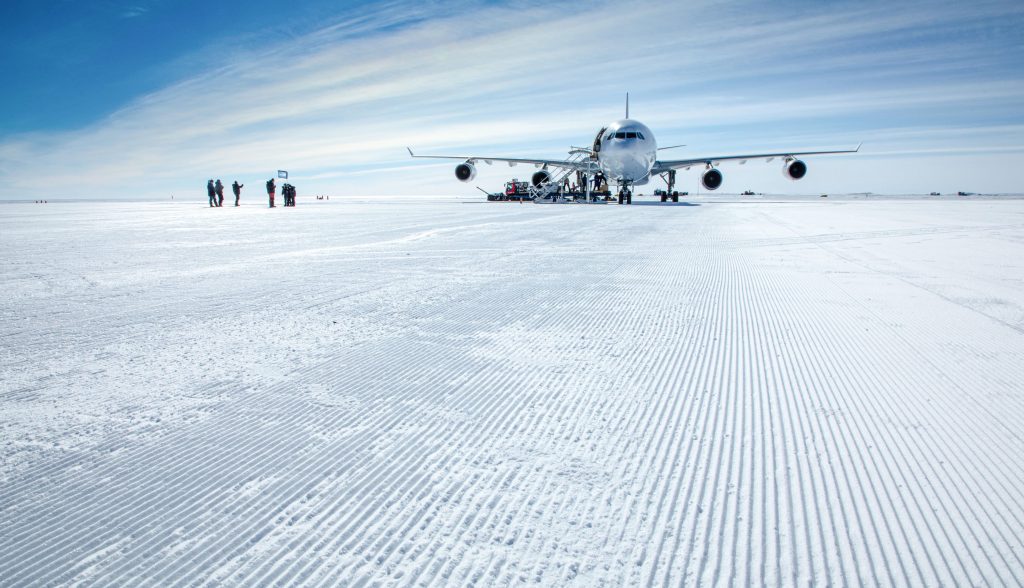 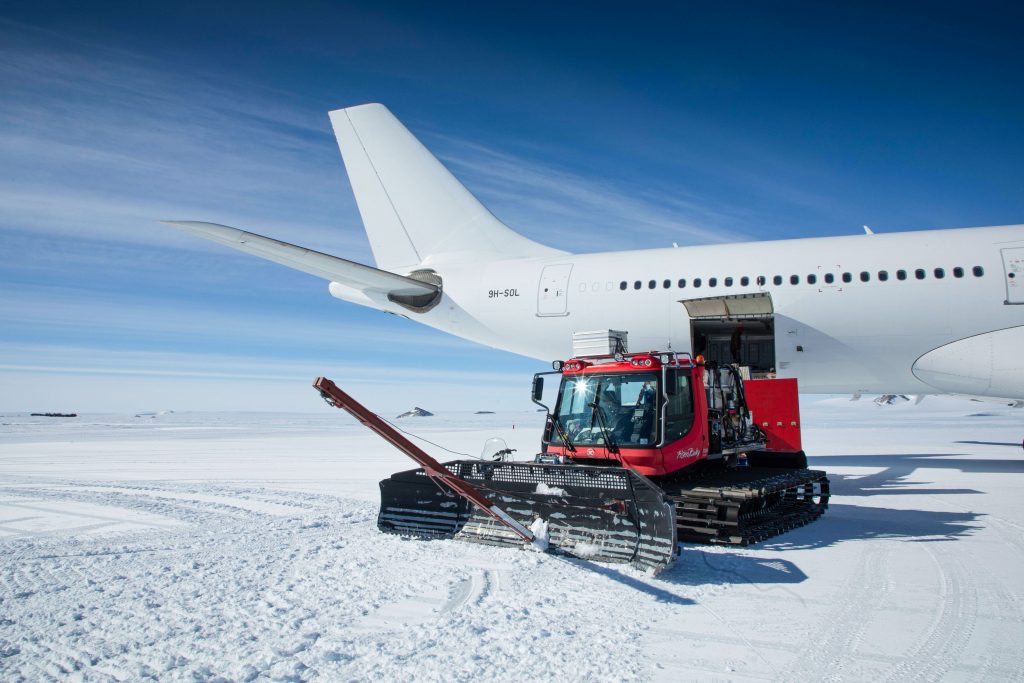 The route to WFR was almost direct, after complying with the instrument departure procedure clearance issued by CPT air traffic control. Soon we were handed over to Johannesburg oceanic through CPDLC / ADS, avoiding therefore the tiring and noisy long range HF communication that dates back to the 50’s.  Digital communication is the norm these days in most air navigation regions. We only lost data link connection 250 miles before WFR.  But at around 180 miles from destination we could reach WFR via VHF. It is not an air traffic control, just a person that has a hand held portable radio that looks after the runway. And indeed they look very well for its condition.

South of 65 degrees we revert to polar navigation techniques, and use True heading as reference.

Also a plotting chart is used to ensure we are not drifting off course. During the route we receive via ACARS (another digital system of communication), frequent weather reports from WFR passed to us through our operations in Lisbon. The guys at WFR have an Iridium Satphone, the only means to communicate from that part of the Globe. Forecasters do a great job, and we only launch to Antarctica when the weather meets our dispatch requirements. But a forecast is a forecast, and when you fly to the end of the world you need frequent assurance that the actual weather meets the forecast.

Weather was looking great, and closing to the top of our descent they are also supposed to pass us runway friction reports. This is measured by a car properly equipped, that covers the length of the runway taking measurements every 500 meters. The frictions were also all above what we considered as minimum, so we started our descent.

Carrying fuel to cover both ways means we would be landing at maximum landing weight of 190 tons. Add the fact that we are operating to an airfield carved out of blue glacial ice and one easily understands that the first ever Airbus A340 landing there attracted a lot of attention and anxiety. But we at the front office were confident that we had done our homework properly.

Our operations department conducted a several months preparation of this flight and the success of our first landing is testimony to a job well done.

Even a visit to WFR, on a business jet carrying scientists, was performed 2 days before our flight, by captain Antonios Efthymiou. This is considered a C category airport, and except for this first flight, all crew will have observed a flight from the cockpit before they operate.

A blue glacial ice runway is hard. It can stand a heavy airplane on it. Its depth is 1,4 kms of hard air free ice. The next important thing is that the cooler it is the better. Grooving is carved along the runway by special equipment, and after cleaning and carving we get an adequate braking coefficient; the runway being 3000 meters long, landing and stopping an A340 that heavy of that airfield wouldn’t be a problem. At least not on paper, as never an A340 landed before in blue glacial ice.

The reflection is tremendous, and proper eyewear helps you adjust your eyes between the outside view and the instrumentation. The non-flying pilot has an important role in making the usual plus extra callouts, especially in the late stages of the approach.

It is not easy to spot the runway, but at one point we have to see it, as absolutely no navigation aids exist in WFR and from around 20 miles we must be in visual contact.

We finally spotted the runway alignment, and started configuring early, selecting flaps and landing gear to be fully stabilized 10 miles before the runway. There is also no visual glide slope guidance, and the blending of the runway with the surrounding terrain and the immense white desert around, makes height judgment challenging, to say the least.

The altimeters in cold weather also suffer from temperature errors, and need adjustments. All this was accounted for. We flew a textbook approach to an eventful landing, and aircraft performed exactly as planned. When we reached taxi speed I could hear a round of applause from the cabin. We were joyful. After all we were writing history.

The turnaround time was much less time than the planned 3 hours. Our Flight Ops and ground ops did an impeccable job and so did our engineers. A true winning team. Equipped for extreme cold we venture outside, greeted people, seen details and places of the runway for a better confidence in the system put in place. All looks good to launch repeatable operations to and from Antarctica.

Take off was uneventful, as so was the returning flight. Customer was happy, we were happy. All goals for this first flight had been met. The event was registered by our reporter Marc Bow. 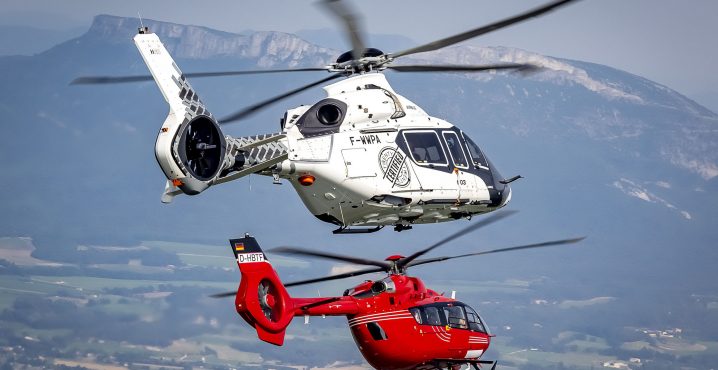 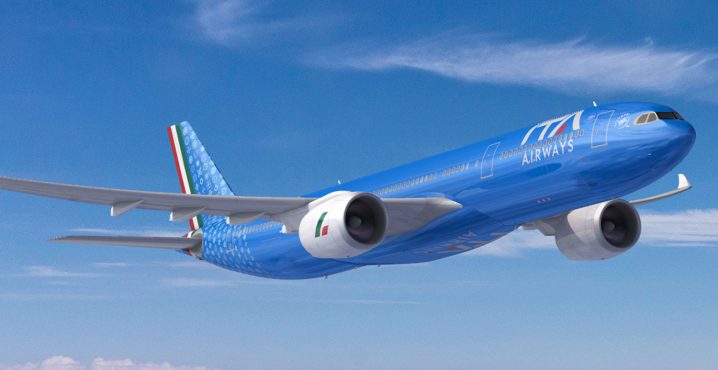 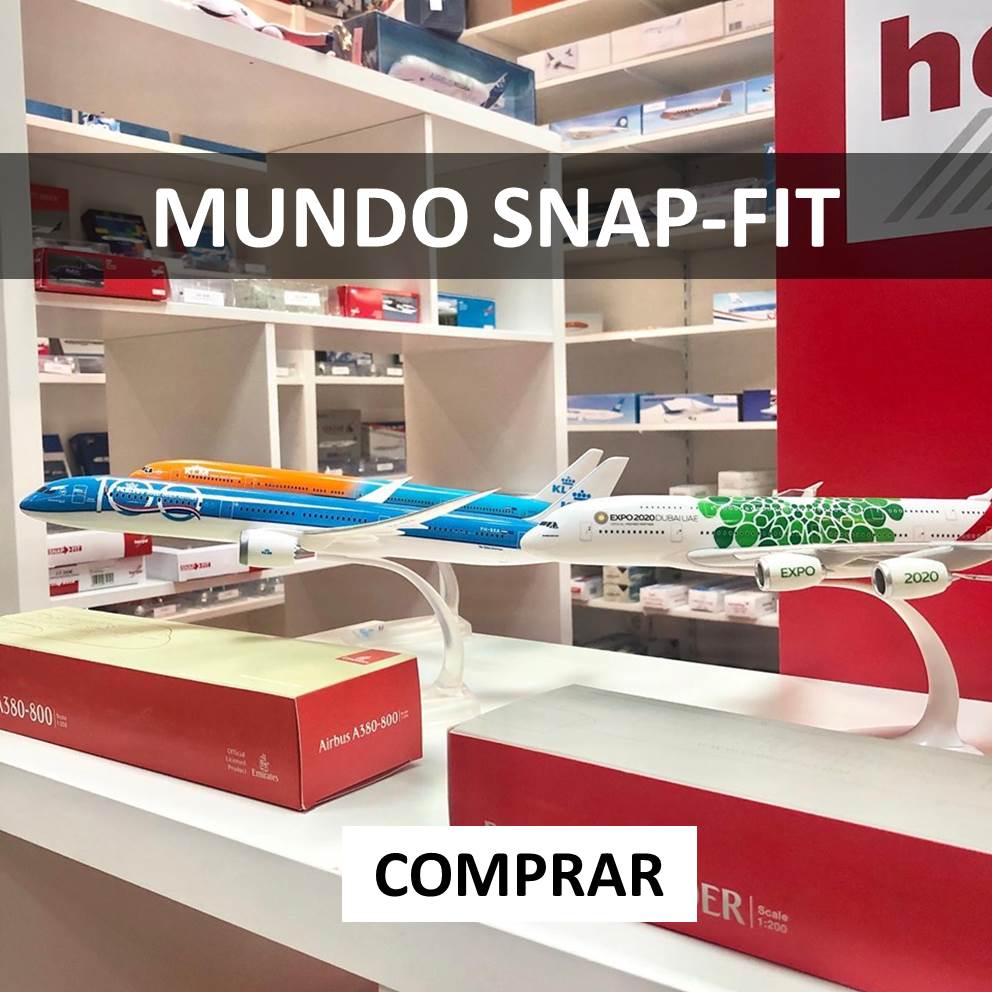 This website uses cookies to improve your experience while you navigate through the website. Out of these, the cookies that are categorized as necessary are stored on your browser as they are essential for the working of basic functionalities of the website. We also use third-party cookies that help us analyze and understand how you use this website. These cookies will be stored in your browser only with your consent. You also have the option to opt-out of these cookies. But opting out of some of these cookies may affect your browsing experience.
Necessary Sempre activado
Necessary cookies are absolutely essential for the website to function properly. This category only includes cookies that ensures basic functionalities and security features of the website. These cookies do not store any personal information.
Non-necessary
Any cookies that may not be particularly necessary for the website to function and is used specifically to collect user personal data via analytics, ads, other embedded contents are termed as non-necessary cookies. It is mandatory to procure user consent prior to running these cookies on your website.
GUARDAR E ACEITAR 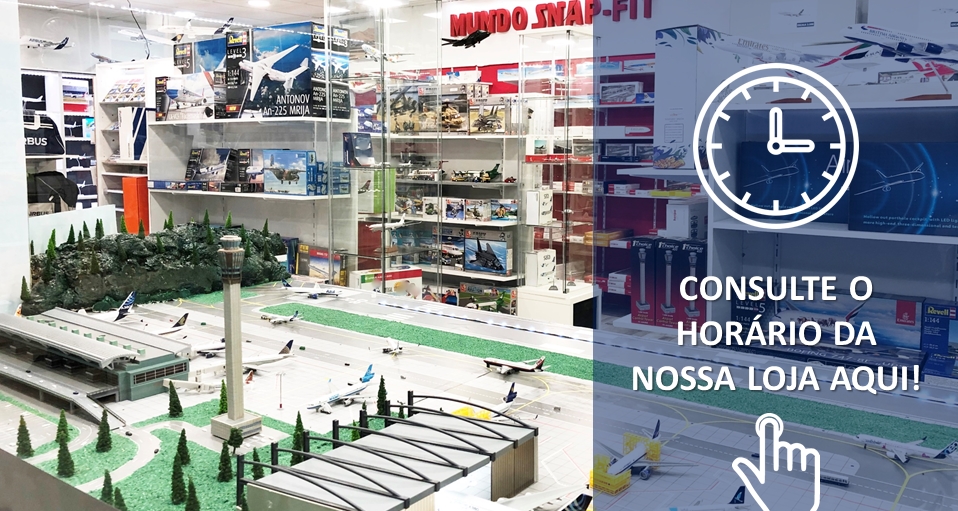